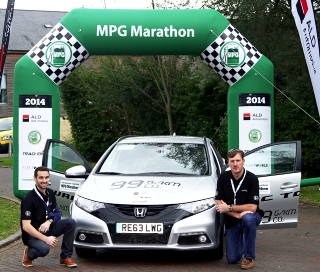 The prestigious eco-driving event, now in its 15th year, will set off from the stunning Heythrop Park Hotel and the Heythrop Park Resort near Enstone in Oxfordshire over a two-day, 300-mile plus route.

Co-sponsored by ALD Automotive, the RAC and TRACKER, this year’s MPG Marathon allows competitors to find the most efficient route between set checkpoints, reprising the approach that was first introduced two years ago.

Prior to the 2013 event, competitors were required to follow a standardised route, but for the last two years they have been able to select the route they felt was the most fuel-efficient, an approach that has proved universally popular.

In previous years, the MPG Marathon has attracted celebrities, motoring journalists, academics and senior figures from the automotive industry, all striving to see if they could complete the chosen route using as little fuel as possible.

It is also open to fleet managers, representatives from fleet services, contract hire and leasing and fleet management companies, and from the motor industry, plus anyone associated with it.

Now the call to enter invites anyone with an interest in showing off their eco-driving skills and beating the standards set by previous winners to take part.

However, they will find that the bar has again been set very high. Last year’s overall champions were Honda engineers Fergal McGrath and James Warren, who recorded an outstanding 97.92mpg driving a Honda Civic Tourer.

Behind the wheel of a new Ford Fiesta ST-3 1.6 litre 182ps EcoBoost model, the pair achieved an astonishing 75.77mpg, over 58% better than the official figures.

Last year’s line-up also included the first entrants in a growing category of electric vehicles, competing to use as little energy as possible while covering the same distance as their petrol and diesel counterparts.

Category winners Jerry Clist and co-driver Peter Thompson’s performance in a Nissan LEAF equated to an astonishing 249mpg in a comparable diesel car, at a cost of just 2.6p per mile.

Electric and hybrid vehicle classes will again be included in this year’s event, and they will be joining the more familiar diesel and petrol engined cars and vans that traditionally take part in the event.

There are eight main classes of passenger cars in this year’s MPG Marathon, restricted to a maximum carbon ceiling of 190g/km, as follows:

Class 1: Passenger cars powered by petrol with CO2 emissions of 99g/km or less﻿﻿

Class 2: Passenger cars powered by petrol with CO2 emissions of 100g/km or more﻿﻿

Class 3: Passenger cars powered by diesel with CO2 emissions of 99g/km or less﻿﻿

Class 4: Passenger cars powered by diesel with CO2 emissions of 100g/km or more﻿﻿

There are also five classes of light commercial vehicles, which will not have a carbon ceiling but are determined by Gross Vehicle Weight, as follows:

Event organiser, Jerry Ramsdale, publishing director of Fleet World, said: “We are delighted to be able to welcome Barclaycard Fuel+ in association with TMC as our headline sponsor for this year’s MPG Marathon, the UK’s leading eco-driving challenge.

“This year’s event will also clearly demonstrate how both vehicle and driver can make a massive difference to fuel costs and emissions and just how effectively that cost can be managed by achieving exceptional fuel consumption.

“As with last year’s event, competitors will be again required to find their own route between a series of fixed points, in much the same way that any normal driver would be required to do.

“The minimum, straight-line distance will again be around 300 miles in total, but competitors will also be allowed to choose a longer route if they feel it will result in a better fuel-saving performance – by avoiding congested town centres, for example.

“All cars will again be fitted with TRACKER equipment, so we will know exactly where each car has been and how far it has travelled. And the RAC will also be on hand to ensure fair play at all times and that vehicles are correctly filled with fuel.

“Entries are now open and we look forward to welcoming a varied but highly competitive field to this year’s event,” said Ramsdale.

For more details of the MPG Marathon please phone 01727 739160, or visit the event website at:  http://www.thempgmarathon.co.uk/