The popular plug-in hybrid BMW 5 Series, 530e, has been updated with the latest battery cell technology, which sees it offer an electric range of up to 41 miles and reduce CO2 emissions by 20% to 41-36g/km. 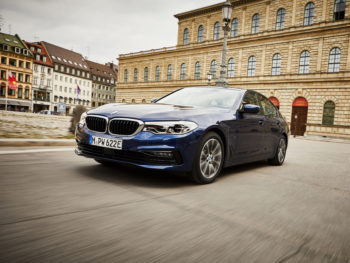 The latest battery improves the 530e’s economy by some 20%, while adding 30% more electric range

The latest-generation BMW eDrive technology now offers combined fuel consumption and CO2 emissions levels by more than 20%, from 156.9 to 176.6mpg.

Alongside the BMW 530e saloon, the all-wheel drive BMW 530e xDrive saloon is also available with a combined fuel consumption of 128.4-141.2mpg and combined CO2 emissions of 49-46g/km. Due to its weight penalty, electric range for the xDrive model drops to 34-36 miles.

The improvements are largely due to a larger battery pack than previously fitted to the 530e, up from 9.2 to 12kWh, yet with no physical size change. This helps ensure cabin encroachment is kept to a minimum, with the battery stored beneath the rear seat rather than under the boot floor or elsewhere in the car.

Unlike the latest plug-in hybrid BMW 745e, the 530e retains its 2.0-litre four-cylinder petrol turbo engine, as opposed to the 3.0-litre straight six of the larger car, which outputs 184hp in addition to the electric motor’s 113hp (252hp combined output) – both driving the wheels through an eight-speed automatic transmission.

Performance is brisk, with the BMW 530e saloon accelerating from 0-62mph in 6.1 seconds and the xDrive version in 6.2 seconds. Top speed for both models is 146mph.

As before, the various eDrive modes still allow driver control of the car’s powertrain functions, ranging from hybrid to electric and using the navigation to predict and promote the use of zero-emission driving in urban areas.

In accordance with recent EU legislation, and new to the car, is an audible warning designed so that the car is audible to pedestrians and other road users at speeds up to 18.5mph (30km/h).

Both hybrid variants of the BMW 5 Series Sedan can meet the conditions for reduced company car taxation in Germany (depending on the equipment level) due to their low CO2 emission levels and their large electric range. Only half the gross list price is used as a basis when calculating the monetary benefit from the private use of the company car.