The first ever BMW i4 electric compact executive car will be priced from £51,509 (on the road) in the UK, with a 367-mile range putting it in direct competition with Tesla’s best-selling Model 3 saloon. 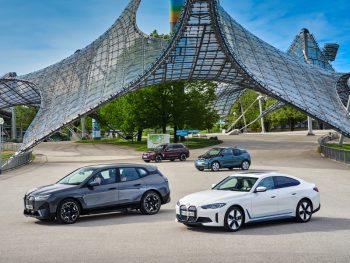 The BMW i4 and iX join the company’s electric line-up in November.

Similar in silhouette to the old 4 Series Gran Coupe, the i4 is a five-door coupe based on the same platform as the current 3 Series, and it joins the company’s compact-executive line-up in November alongside the electric iX3 SUV.

In the UK, the line-up will comprise three versions. The eDrive40 is the likely big-seller, featuring a single motor at the rear axle which produces 340hp, and an 83.9kWh (gross) battery beneath the cabin, providing a range of 367 miles to a full charge. It’s available in Sport and M-Sport trim levels (£51,905 and £53,405 respectively) and priced slightly higher than the Tesla Model 3 in Long Range Dual Motor spec.

The i4 M50 is BMW’s first electric car from the M performance division. This uses the same battery but adds a second electric motor at the front axle and a Sport Boost button which offers the full 544hp for up to ten seconds. It’s priced at £63,905 on the road – again, slightly higher than the Model 3 Performance – and offers a range of 317 miles to a charge.

Both powertrains are compatible with the CCS charging standard, at speeds of up to 200kW where available – that’s four times faster than conventional rapid charging. This can recover 102 miles in ten minutes in the eDrive40, or 87 miles in the same time in the M50.

Pricing for the i4 was announced alongside the UK line-up for the company’s technology flagship, the iX SUV, which is a similar size to the X5 and also arrives in November. This will also be offered with two dual-motor powertrains at launch; the 326hp xDrive40, which offers a range of 257 miles, and the 523hp xDrive50 which has a larger 111.5kWh (gross) battery capacity and 380-mile range.

Both will be available in Sport and M Sport trim levels, priced from £69,905 on the road, and include the same ultra-fast charging capability as the i4. A 600hp M60 variant, developed by the M division, will follow. All versions include a carbon fibre ‘cage’ for the body, with panels made from carbon fibre reinforced polymer to save weight.

Product launches coincide with BMW announcing plans to expand manufacturing capacity at its plant in Dingolfing, Germany, where its electric powertrains are built. From 2022, the company is targeting production of half a million electric and plug-in hybrid vehicles per year, with batteries set to be built within Germany.