Less than a week after it presented the motoring press with its forthcoming i3 and i8 electric and hybrid concept cars, the BMW Group has published the results of its recently completed Mini E trial, studying the day-to-day usage of electric vehicles. 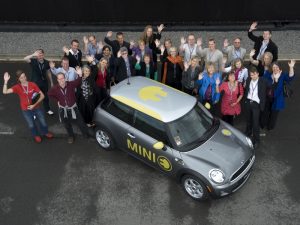 The results showed range anxiety wasn’t an issue for participants.

Conducted over 12 months, split into six month periods, the trial put 40 204bhp battery-electric Mini E cars into daily use with 62 members of the public and 76 pool car users. Between them, they accrued data from 258,105 miles, logged electronically via the cars and home charging points and analysed by Oxford Brookes University.

It found range anxiety wasn’t much of an issue for participants. The cars covered an average 29.7 miles per day, three miles more than the conventionally powered MINI Cooper and BMW 116i control cars and greater than the UK daily average of 25 miles.

Participants’ average journeys covered 9.5 miles, compared to a UK average of seven. Four out of five drivers said they’d be able to cover most journeys in the MINI E, with 90% saying they could have covered all trips if the car had a bigger boot and more rear legroom.

Although the lack of infrastructure was noted as a problem, most charging was done at home, with cars charged on average 2.9 times per week using the included home charging point. Almost three quarters said this caused no problems. Encouraged to top up during off-peak periods, MINI E owners were paying, on average, less than 2p per mile to drive the cars.

Almost all participants (91%) said home charging suited their daily routine, with 81% preferring it over a trip to the petrol station. All said they found the cars fun to drive, with 96% claimed they would be interested in buying one as a result of the trial and over half saying they would be prepared to pay extra for electric power. Drivers said they found range extension, using brake regeneration, was enjoyable rather than a chore.

The trial also included the cold snap at the end of 2010, allowing BMW Group to examine potential problems from extreme temperatures. Most said this reduced the car’s range, but four out of five claimed it was up to the task of winter driving – one covered 88 miles on a single winter journey, and another racked up 8,000 miles between September and March.

One of eight projects included in the £25m Ultra Low Carbon Vehicle Demonstrator programme, the trial was supported by the Technology Strategy Board and Department for Transport. BMW Group has said the results will help inform future EV policy in the UK, as well as informing the development of its own vehicles.

The BMW Group has used data from the first period to develop its ActiveE fully electric 1 Series Coupe prototype, which will in turn provide development information for the production i3 due in 2013.