By Jonathan Musk / 9 months ago / UK News / No Comments

bp Chargemaster has partnered with Marks & Spencer (M&S) in a new EV trial to gauge customer use at the latter’s stores. 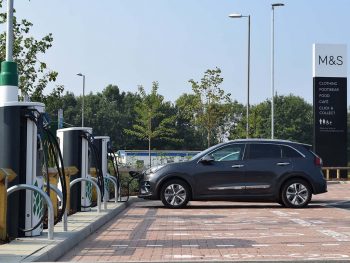 bp Chargemaster and M&S have partnered to assess the use of electric vehicle (EV) rapid charging at the latter’s stores across the UK, with a new Maidstone installation serving as the first of a five-store trial.

The Maidstone store is M&S’s newest, located at the Maidstone Eclipse Park (close to junction 7 of the M20 in Kent).

bp Chargemaster says users typically spend 30 minutes plugged in at a rapid charger, which allows customers time to browse in store while their car charges. The chargers have been paid and installed by bp Chargemaster, which operates around 600 rapid charge points across the UK as well as operating the UK’s largest charge point network.

Helen Milford, director of stores for M&S said, “At M&S we know our actions today protect our planet for tomorrow and we’re committed to the use of renewable energy within our own operations and supporting our customers, which makes this a really exciting trial for us. As we create a store estate for the new world it’s critical our shops are in the right locations, digitally connected and offer trusted value products and services such as the rapid chargers – we’re looking forward to seeing the customer response to our trial in Maidstone.”

Matteo de Renzi, CEO of bp Chargemaster, said: “As well as serving existing M&S customers who already, or may soon drive electric vehicles, we expect the rapid chargers to bring new customers to these stores. They are in the right locations to support those driving along the strategic road network and provide a great opportunity to charge while you shop.”

Previous: BMW 5 Series gets new straight-six powered plug-in option
Next: London takes the next STEP in bringing EV charging for the masses