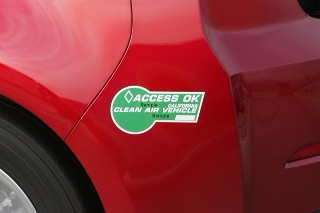 Introduced in 2012, the Clean Air Vehicle decal scheme enabled drivers of eligible hybrid, electric, hydrogen fuel cell and CNG cars to use the state’s High Occupancy Vehicle (HOV) lanes, without passengers, during rush hours provided they paid for a decal from the California Department of Motor Vehicles.

Claimed to reduce average commuting times by 36 minutes, it’s been a vital part of making California the US’s most advanced market for alternative fuel vehicles. However, widespread popularity meant the original limit of 40,000 decals was reached in May 2014 – just over two years after launch.

So far, the CARB has granted three extensions, each comprising 15,000 additional decals, more than doubling the original limit. With the 85,000 vehicle limit now reached, applications are being taken to assess demand for a fourth extension, but the board said there are no guarantees of when or if this happen.

The White Clean Air Vehicle decals, only available for battery-electric, hydrogen fuel cell and compressed natural gas vehicles, are offered in an unlimited volume and are still available. Both schemes are scheduled to end on the 1st January 2019.