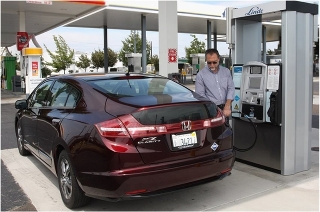 Expected to become one of the most advanced hydrogen fuel cell markets in the world, California has eight publically accessible refilling stations spread between West Sacramento, and Thousand Palms, east of Los Angeles. By the end of the year, a site on the Interstate 5 will enable hydrogen fuel cell vehicles to travel the 500 miles between San Francisco and Los Angeles.

The new station, operated by Linde, is located at the Ramos Oil Company site to the east of the city centre. This places it close to the intersection between the Interstate 5 and U.S. Route 50 highways, and near to the Interstate 80 – all major roads through the area.

Significantly, it was also the first to be officially designated as a hydrogen filling station. This required permits from local authorities, approval by the Department of Weights and Measures for selling hydrogen by the kilogram, and letters from two manufacturers proving that it could refuel their vehicles

Linde’s hydrogen pump is designed for high throughput, offers a video guide to help users, and drivers can pay for fuel with a credit card as they would any other transaction. The company also has a partnership with Daimler, and is installing hydrogen stations across Germany.