Toyota and four other carmakers have teamed up with oil companies including Royal Dutch Shell and Total to form a new global initiative on hydrogen development. 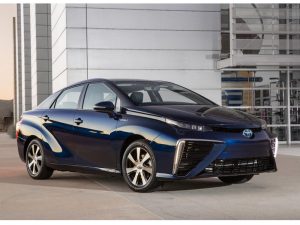 Launched in Davos, Switzerland, the 13-member Hydrogen Council will help drive the development and commercialisation of the hydrogen and fuel cell sectors, backed by investment of €1.4bn a year.

The council will work with, and provide recommendations to, a number of key stakeholders such as policy makers, business and hydrogen players, international agencies and civil society.

The Hydrogen Council currently comprises 13 CEOs and chairpersons from various industries and energy companies committed to help achieve the goal in the 2015 Paris Agreement of keeping a global temperature rise this century well below 2 degrees Celsius above pre-industrial levels.

Benoît Potier, CEO, Air Liquide, said: “The Hydrogen Council brings together some of the world’s leading industrial, automotive and energy companies with a clear ambition to explain why hydrogen emerges among the key solutions for the energy transition, in the mobility as well as in the power, industrial and residential sectors, and therefore requires the development of new strategies at a scale to support this. But we cannot do it alone. We need governments to back hydrogen with actions of their own – for example through large-scale infrastructure investment schemes.”

Takeshi Uchiyamada, chairman, Toyota, added: “We know that in addition to transportation, hydrogen has the potential to support our transition to a low carbon society across multiple industries and the entire value chain. The Hydrogen Council aims to actively encourage this transition.”

The launch of the new council is supported by a report entitled ‘How Hydrogen empowers the energy transition’ which outlines the future potential for hydrogen and sets out the vision of the council and the key actions it considers fundamental for policy makers to implement.

Previous: Audi to expand electric vehicle portfolio in China
Next: Hyundai to launch 14 electrified vehicles by 2020