By Natalie Middleton / 2 years ago / Features, UK News / No Comments

With entries now open for this year’s Energy Saving Trust Fleet Heroes awards, we review some of last year’s winners and their eco successes. 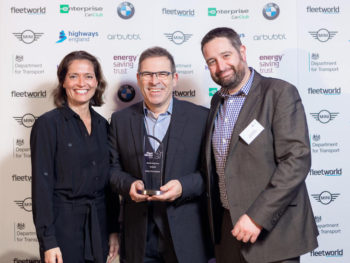 Far from resting on its laurels after winning two titles at the 2018 Fleet Hero Awards, Bibby Distribution says it’s been energised into advancing its safety and environmental work further.

The company, part of the family-owned Bibby Line Group, has been in operation since 1985, and designs, implements and manages effective supply chain solutions in more than 50 locations across the UK.

Its Road to Zero programme strategy is aimed at Zero Harm, Zero Waste and Zero Emissions, and since establishing this in 2017 it has reduced CO2 emissions as well as fault accidents, fuel consumption and more.

Its work to cut its carbon footprint and enhance safety also saw it take both the Freight Hero and Ecodriving Hero awards from the Energy Saving Trust at last year’s Fleet Hero Awards, which are run in partnership with the Department of Transport.

According to driver training & telematics manager David Morley, the business entered the Awards to benchmark itself against other like-minded organisations – and while Morley acknowledges that the Awards showed Bibby Distribution it’s clearly heading in the right direction, he adds that attending the awards and seeing the work that other organisations are doing has indicated that it needed to do a lot more to achieve its safety and environmental aims.

As a result, the business has made significant progress since last year’s event. Morley comments: “Over 65% of our drivers achieve the top Microlise telematics A grade and over 95% are A or B grade drivers. The high standards of driving are the key contributor to improved safety & environmental performance.

“This was recognised in 2019 when Mark Field (a Bibby LGV driver from Milton Keynes) won the Microlise Driver of the Year Award from a field of over 100,000 drivers.”

In addition, the firm’s work on vehicle replacements means that 99% of the fleet is Euro 6 and all remaining vehicles will be Euro 6 by 2020.

As well as Bibby Distribution’s own work, Morley also says that action needs to be taken by the logistics industry at large to tackle eco and risk management issues.

Commenting on the current issues within the fleet world that he would like to be addressed, he says: “Suitable, practicable and affordable alternatives to diesel/petrol powered vehicles, making our industry attractive to new entrants, younger, more diverse and inclusive, and putting a greater emphasis on improving safety/environmental awareness amongst car/van drivers rather than just professional LGV drivers.”

Be a Fleet Hero too:

The 2019 Fleet Hero Awards are now open for entries, enabling UK organisations large and small to shine a light on their work to reduce carbon emissions and improve business operations.

Entries can be made online at https://fleetheroes.org.uk/awards. The deadline for applications is Monday 30 September.