Chinese state-owned car manufacturer Changan Automobile has laid out plans to stop sales of petrol-engined vehicles by 2025 as it focuses solely on electric and plug-in hybrid vehicles. 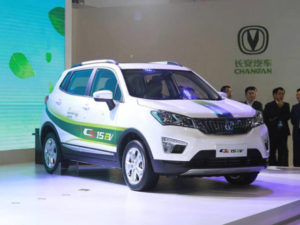 Announced as the carmaker debuted three new electric models, the ‘Mission Shangri-La’ plans would see it invest more than 100 billion yuan in the industry and supply chain to drive implementation of electric vehicles.

The carmaker – which has joint ventures with major OEMs including Ford and PSA – said the plans would see the development of a new platform that would be used to underpin more than 30 kinds of electric and plug-in hybrids, including SUVs, MPVs and saloons by 2025. Changan also pointed to plans to achieve a 5-minute charging time to achieve 62 miles (100 km), as well as a range of over 620 miles (1,000km).

Other facets of the plan would see 11,000 personnel deployed to drive R&D.

Changan also unveiled its latest EV and PHEV vehicles, including the Eado saloon and CS15 crossover.