Chevrolet says 90% of Volt journeys will be electric 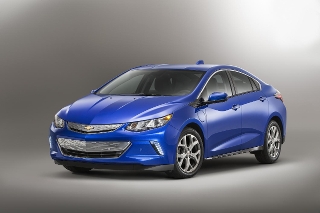 The manufacturer’s data showed owners of the outgoing car were able to cover 80% of their journeys in electric mode, with an average of 1,000 miles between fill-ups. But customer feedback suggested many wanted more range.

As a result, the new Volt features a larger battery – 18.4kWh compared to 16.5kWh in its predecessor – and is re-tuned for more efficiency in electric mode. As a result, equivalent fuel economy for the electric drivetrain has risen from 93mpg (111.7mpg Imperial) to 106mpg (127.3mpg Imperial), with a corresponding 53 miles of range, up from 35 miles in its predecessor.

With the battery depleted, the Volt’s new 1.5-litre petrol range-extender offers an EPA-estimated fuel economy figure of 42mpg, compared to 34mpg for the first-generation car – sold in Europe as the Opel and Vauxhall Ampera. However, the Volt still cannot be rapid charged.

Andrew Farah, vehicle chief engineer, said: “We listened to our customers. They were very clear when they told us that they wanted more range, and a fun driving experience behind the wheel. We are confident that the 2016 Volt delivers both.”

General Motors has yet to confirm whether the Volt, or a car based on it, will be offered in Europe. But Opel has revealed that the Ampera will be replaced with another plug-in vehicle.