Citroën has released the first images and details about its new plug-in hybrid model, CXperience Concept, ahead of the Paris Motor Show next month. 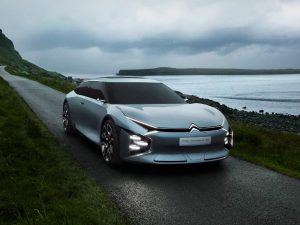 Hinting that Citroen may be working on a large vehicle, replacing the C5 and C6, the name links back to the CX executive car, and it features a new family front end plus a concave rear window.

Having confirmed seven plug-in hybrids and four electric vehicles by the end of 2021, the concept showcases a high-performance petrol-electric plug-in hybrid drivetrain, producing up to 300bhp with both power sources combined.

This also offers a range of 36 miles, via a 13kWh battery, which can be charged in less than two and a half hours via a 6.6kW/32-amp home charger, or four and a half hours on a 16-amp system.

Cxperience Concept features a technology-rich infotainment system and the ConnectedCAM Citroën, premiered on the new C3. All technology will be available for testing at the Paris Motor Show.