By Contributor / 1 year ago / Features / No Comments

Is hydrogen part of the answer for a rapid shift away from fossil fuels in transport? Gareth Hinds from the National Physical Laboratory shares his vision of the near-term future of hydrogen vehicles in the UK. 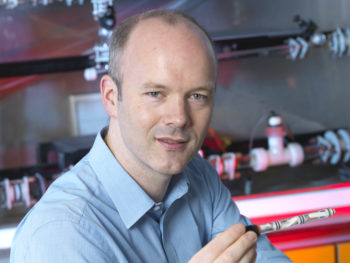 Three weeks ago, Grant Shapps, the UK’s Secretary of State for Transport, announced that the ban on selling purely petrol or diesel-powered cars could be brought forward by five years to 2035. In Scotland, that ban is already set to come into force in 2032.

Britain’s busy roads are tipping our air quality over safe and legal limits. 81 major roads in towns and cities have exceeded legal air quality limits for nitrogen dioxide. The transport sector recognises the need to reduce its carbon emissions, as it currently contributes a quarter of the UK total.

Successfully phasing out cars running on fossil fuels is a key part of keeping Britain’s 2050 net zero greenhouse gas emissions commitment. Electric vehicles are an important first step on this path and their uptake is increasing rapidly. This is also currently the only realistic option, as lithium-ion batteries can be recharged using mains electricity and represent the only technology sufficiently mature and widely available to deliver the extremely challenging performance requirements.

Looking ahead, however, it is not feasible to rely on battery technology alone to achieve full decarbonisation of transport. While batteries are well suited to frequent short trips using smaller vehicles, for longer distances and heavier vehicles their size and weight becomes prohibitive. They also contain toxic and difficult to recycle materials that would pose a huge challenge should they be manufactured on the scale of the world’s entire transportation fleet.

This is where hydrogen-powered vehicles can provide a complementary solution, especially because they require little adaption in consumer behaviour. For passenger cars, their range and refuelling time are already comparable to petrol and diesel vehicles: up to 400 miles with a refuelling time of under five minutes.

The environmental benefits are clear, both in terms of air quality improvement and climate change mitigation. In hydrogen-powered vehicles, hydrogen passes through a fuel cell stack and reacts with oxygen from the atmosphere to produce electricity, which powers the vehicle. The only emission is water.

Better still, there are no toxic or explosive materials in a fuel cell stack. All of the energy is stored in the hydrogen tank so the devices themselves are easy to dismantle and are almost 100% recyclable. This adds significant weight to the argument for hydrogen.

Earlier this month, the Hydrogen Energy Ministerial Meeting in Tokyo, with officials from more than 30 countries, announced the collective introduction of 10 million hydrogen-powered vehicles worldwide in the next decade to curb greenhouse gas emissions.

In order for this pledge to become a reality, some technical challenges must first be overcome. For example, fuel cells are extremely sensitive to impurities such as carbon monoxide and hydrogen sulphide in the hydrogen being supplied to them. Even trace amounts of these impurities can quickly degrade the performance of the cell.

The UK’s National Physical Laboratory (NPL) has developed world-leading capability in assessing the impact of impurities on fuel cell performance under real world operating conditions. The outputs of this research will feed into revision of international standards that set limits on impurity levels in hydrogen. Greater confidence in the reliability of these threshold limits will allow industry to reduce unnecessary costs associated with over-conservatism in purification requirements.

Supply of hydrogen is another major issue. However, there are ambitious plans to convert the UK natural gas grid to hydrogen, which could be used to heat homes via combustion in hydrogen boilers. This would also provide a widely accessible distributed source of hydrogen for vehicles.

A hydrogen gas grid raises challenges around identifying a suitable odorant that doesn’t impact the performance of fuel cells and boilers, in addition to the potential for hydrogen leakage and embrittlement of pipeline materials in the presence of the gas.

NPL is working to answer such questions. The ever-growing evidence base demonstrates the near-term potential for hydrogen to make a cost-effective and scalable contribution to decarbonising the UK’s transport and heating sectors.

For automotive manufacturers, a combination of electric and hydrogen-powered vehicles will be paramount for rapidly moving away from petrol or diesel-powered vehicles. Neither technology on its own has all the answers. Exploiting their respective strengths should make a sustainable UK transportation sector a reality sooner rather than later.

Gareth Hinds is Fellow and Science Area Leader in Electrochemistry at the National Physical Laboratory (NPL) and also newly appointed Fellow of the Royal Academy of Engineering. His multi-disciplinary expertise combines electrochemistry with materials science for energy applications. He holds visiting academic positions at University College London, the University of Strathclyde and Harbin Institute of Technology in China. He is playing a key role in making hydrogen a realistic option for future energy infrastructure in the UK.