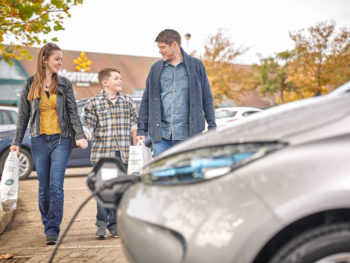 The supermarket giant announced earlier this year that it was tying up with the GeniePoint charging network, run by ChargePoint Services, which was acquired by French utility giant Engie this summer.

The 50 charging points – which will be joined by a further 50 by the end of the year – are 50kW+ and are said to provide the supermarket with the biggest network of rapid charging points.

Although Tesco is currently in the process of kitting out its stores with 2,400 charging bays in partnership with Volkswagen and Pod Point – said to mark the UK’s largest free charging network – its chargers are a mix of standard 7kW fast chargers available for free or 50kW rapid chargers “for a small cost in line with the market rate”.

Morrisons’ new chargers will enable customers to fill their car up even during a short shopping trip, which means that a 20-30 minute charge will give drivers up to 100 miles of travel range. Customers can register to use the GeniePoint chargers via the web app www.geniepoint.co.uk, which is free to join. There is no monthly fee and drivers only pay for the electricity they use, which costs 30p per kW hour.

Andrew Ball, fuel & services manager of Morrisons, said: “Customers are beginning to take part in the biggest revolution in car design since the internal combustion engine was first developed. We need to follow them and give them the opportunity to charge while they shop.”

The charging points have been located around the perimeter of the car parks to ensure they don’t obstruct other customers. The majority of the electricity will come from Engie, which buys from zero-carbon energy sources, such as hydroelectricity, biomass, bio-gas, wind and solar.

Alex Bamberg, managing director, Engie EV Solutions, said: “Providing convenient, fast charging facilities is essential in ensuring drivers have the confidence to switch to electric vehicles and reduce traffic pollution.  Morrisons supermarkets are ideally situated in communities as drivers go about their day to day activities, and will make an important contribution as we build the most reliable rapid charging network nationwide.”