Continental has developed a new charging system which uses the vehicle’s motor and invertor to offer faster top-ups and much wider interoperability. 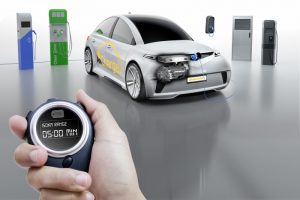 The AllCharge system was designed to address issues from non-standardised charging point connectors, and to significantly increase the speed at which plug-in vehicles can top up as battery capacities continue to grow.

Continental said the idea stemmed from modifying the motor and invertor – existing drivetrain components which already switch between DC and AC power – to assist with charging. The only additional component is a DC/DC convertor, to regulate the power flow to the battery.

It means AllCharge can offer a much wider range of charging speeds through a single connector, from single to three-phase AC and even high-power DC, depending what it’s plugged into. On an AC unit, current is directed through the motor to the inverter, which turns it into DC before it goes to the battery, while a DC charge goes straight through the invertor.

Continental said this enables vehicles 12-times faster top-ups on inner-city AC charging points – as high an output as today’s rapid chargers. The system can also take a 350kW charge from a DC charger, which is seven times the output of today’s rapid chargers and adds around 96 miles of range in five minutes.

The technology also enables vehicles to offer a 230-volt on-board power supply; enough to run equipment such as a laptop, powertools or even a fridge. Features which would make it attractive in the commercial vehicle sector.

Dr. Martin Brüll, Continental‘s project manager for powertrain, technology & innovation, explained: “What was always lacking up until now was some sort of universal solution capable of working with any type of charging station. Such a universal solution is now available in the form of AllCharge.”