SEAT performance spin-off Cupra has unveiled its Tavascan electric SUV coupé at Frankfurt as both brands continue to make moves into electric mobility. 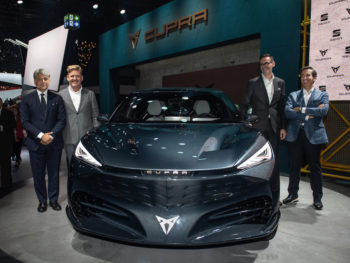 Building on the Cupra Formentor plug-in hybrid coupé crossover that was revealed earlier this year and is due for launch in 2020, the Tavascan concept car is Cupra’s first fully electric vehicle.

It’s been developed on the Volkswagen Group’s MEB platform and is described as marrying up the silhouette of a four-door crossover, with the presence of an SUV and the sleekness of a sporty coupé.

Power comes from two electric motors – one on each axle – giving a total output of 306hp and equipped with a 77kWh battery pack to provide a WLTP-rated all-electric range of up to 450km (280 miles).

The 0-62mph time is less than 6.5 seconds and the battery pack is housed in the floor, bringing a low centre of gravity said to engender a dynamic drive in keeping with the brand’s credentials.

Interior features bring diffused LED ambient lighting, a mix of contrasting leather, carbon and Alcantara and a floating floating dashboard that features a 12.3-inch digital instrument cluster supplemented by a 13-inch infotainment display, which can move towards the passenger when needed.

Cupra also used the concept to debut the eXS kickScooter, specially developed for the occasion, while the Tavascan was also joined at Frankfurt by the plug-in hybrid SEAT Tarraco. The brand’s first plug-in hybrid model, this arrives late 2020 and provides the fourth electric model of the six that the company announced it would launch by 2021.

Speaking at SEAT’s press conference, vice-president for R&D Axel Andorff said: “The plug-in hybrid Tarraco perfectly illustrates our strategy towards more sustainable mobility, and at the same time it retains all the dynamism and driving fun that characterise any SEAT model and especially our FR models.”

SEAT also announced at the show that pre-sales of the new Mii electric – the brand’s first electric model – will begin from mid-September, replacing the previous petrol version.

The model will be available to order in 14 countries in Europe, including the UK, priced at €16,300 (some £14,500) in Germany (including government and brand subsidies) and starting deliveries in early 2020.

The launch of the Mii electric will also see SEAT introduce a smart Wallbox home recharging solution that can be ordered at the same time as the Mii and enables drivers to optimise the car’s recharging time and manage all the information on their mobile phone or via an online platform.