By Katie Beck / 5 years ago / International News / No Comments 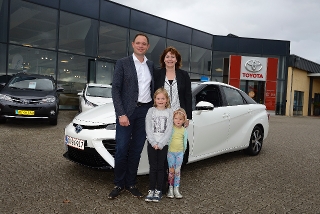 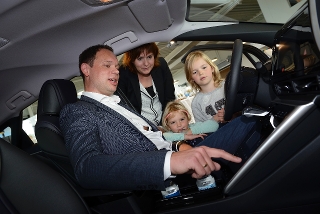 Kristian Krapper, President of Toyota Denmark, handed-over the car keys to Mr. Krogsgaard and his family at the Toyota-dealer STS Biler in Herning in Denmark.

“I am very proud to be the first Mirai-customer in Denmark. It is without a doubt the car of the future, and I am looking forward to driving around together with my family knowing that the only emission from the car is water vapour,” commented Mr Krogsgaard.

It is no coincidence that Toyota has chosen Denmark as one of the first countries in the world to introduce the innovative fuel cell vehicle. Fuel cell vehicles are exempt from registration fees at least until 2019 in Denmark. In addition, as the only country in the world, Denmark has a nationwide network of hydrogen refuelling stations with a total of seven stations in operation across the country. With a range of more than 500 km on a full tank it is thus now possible to drive Mirai from one end of the country to another.

Using hydrogen gas to generate electricity within a fuel cell stack, Mirai produces no tailpipe emissions other than water. Even the hydrogen, that is being used to refuel the car, is produced 100% in Denmark by wind turbines which are renewable green energy. A full-tank driving range of around 500 kilometres bears comparison with a petrol-powered car and the refuelling process only takes about three minutes to complete.

Denmark is among the first wave of markets in Europe for Mirai, together with the U.K., Germany and Belgium.