By Alex Grant / 5 years ago / New Cars, Road Tests / No Comments
Although Toyota isn’t aiming for Corolla-esque volumes with the Mirai, the brand’s first production hydrogen fuel cell car is probably the most important new model it’s launched in the UK since the original Prius. 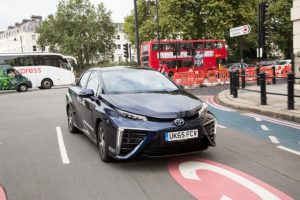 Powered by an electric motor, a 300-mile range replenished in less than five minutes and a renewable fuel with water vapour as its only emission, it’s another step towards technology which almost sounds too good to be true. Yet this is being sold much like any other car in the UK. Most customers are expected to take out the £750 per-month four-year lease, which includes fuel, maintenance and 24/7 assistance, but it’s possible to buy outright and this will re-enter the market as a used car.

Toyota is thinking big in the long term. It reckons hydrogen fuel cells will be as much of a turning point as hybrids, a technology now commonplace across the industry. Other manufacturers are being given free access to selected patents to accelerate development, and 2020’s hydrogen fuel cell BMW will use technology derived from this car.

The fuel cell functions via a process similar to reverse electrolysis, splitting hydrogen into positive and negative ions through a catalytic membrane and passing the electrons through a circuit to produce electricity, which powers an electric motor. Combined with oxygen from the air, the only by-product while driving is water.

Otherwise, it functions a little like a hybrid. There’s a battery behind the rear bench which can recuperate enough energy to power the electric motor under low loads, in turn reducing hydrogen consumption. That there’s a family resemblance to the forthcoming Prius is no coincidence.

What’s most impressive about this is how normal it is to drive, particularly for those familiar with Toyota and Lexus hybrids. There’s a short gearstick on the centre console with a Br mode to simulate engine braking, a large display screen across the top of its swopping leather-wrapped dashboard, and the electric motor delivers its 152bhp smoothly and effortlessly up to motorway speeds. It drives like a very quiet Prius.

But, as a passenger, it’s as luxurious as a large Lexus. Ride quality is excellent, wind noise almost non-existent and there’s only faint tyre roar at speed – only a few slightly sub-par hard cabin plastics belie its £66,000 outright purchase price.  Toyota has leased two Mirais to London-based private hire operator Green Tomato Cars and, from the sofa-like comfort of the two-seat rear bench, it should get passengers talking.

Infrastructure is the biggest limiting factor. Hydrogen is dispensed at two pressures, and the Mirai requires the higher of these, which enables it to carry more fuel and thus offer a longer range. There are only three UK filling stations which offer this, though another three are set to open by the end of Q1 2016.

So Toyota expects 12 UK Mirais to be registered by the end of November, with a fleet-weighted annual volume of between 50 and 100 units evenly spread across Europe’s three launch markets through its life cycle. The forward-thinking businesses adopting this technology early have a fascinating few years ahead of them.

The Mirai’s distinctive styling is a moot point, but the technology underneath is hard to argue with. A clever and impeccably executed luxury car which shows how market-ready hydrogen fuel cells have become.