Devon gears up for EVs with free installation of rapid chargers

By Natalie Middleton / 3 years ago / Tech, UK News / No Comments

Devon has deployed the first of six free rapid chargers from Instavolt under plans to gear up for electric vehicles, at no cost to the tax payer. 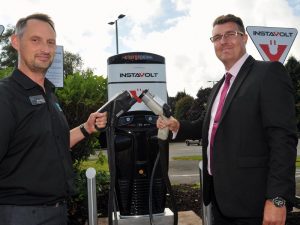 Under the partnership, InstaVolt installs the chargers for free, giving the council a rental income for housing them on their land and make money from the sale of electricity per kWh used by plug-in vehicle drivers.

Drivers also benefit, as the units are open for public use on a pay-as-you-go basis with no connection fee, which means drivers only pay for the energy they use.

In conjunction with Mid Devon, Instavolt has already installed the first unit at Exe Valley Leisure Centre in Tiverton with other units to follow in Cullompton and Crediton.

Councillor Ray Stanley, cabinet member for housing at Mid Devon District Council, said: “I’m hoping this initiative encourages residents to have the confidence to purchase electric vehicles and so help us in our quest to improve air quality and drive down carbon emissions in the area.”