The CEZ Group is to expand its EV charging network in the Czech Republic with the help of EV charging software provider, Driivz. 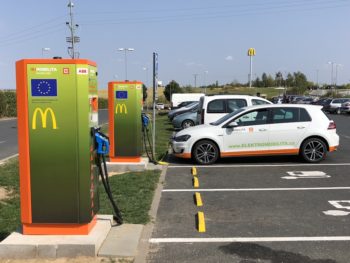 The network, known as ČEZ Electromobility, is said to be the largest EV charging network in the Czech Republic and is being expanded with 63 new 50kW public fast-charging stations along major roads. This is in line with the Czech Ministry of Transport’s plans to construct an additional 500 charging stations by 2023 alongside the existing c.400 stations to support growing EV take-up; currently there are approximately 3,000 EVs registered in the Czech Republic and this is expected to rise to 500,000 by 2030.

CEZ Group’s network expansion is being financed by two grants from the European Commission’s Connecting Europe Facility programme for the transport sector and the Operational Programme ‘Transport’. Part of the network is also being built by the CEZ Group at its own expense.

Appointed following a tender process, Driivz will deliver the charge point management system for the entire ČEZ Electromobility network. A wide range of modules from the company’s platform will be provided, such as dedicated portals for drivers and operators and a tailored mobile app for both Android and Apple users that includes account management.

Other elements will include bespoke billing and a 24/7 alert management system, offering live notifications and automatic self-healing functionalities across the entire network of charge points. Drivers and CEZ Group operators will also benefit from data and reporting analytics giving insights into which charge points are available and use the most energy, as well as what the peak charging times are across the entire network.

Tomáš Chmelík, section manager of CEZ Group’s Clean Technology Department, said: “Our EV team searched for an advanced EV charging solution and found that Driivz was the best software to fit the charging requirements of our expanded EV charging network. We were looking for a cost-effective and stable solution that offers operational excellence, advanced billing capabilities and smart energy management, which Driivz delivers along with unparalleled technical excellence.”

The new contract adds to Driivz’s global portfolio, which includes projects in 15 countries across Europe, the Middle East and North America.

Previous: Eco benefits are key motivator for drivers to go electric
Next: Comment: Time to act on fleet electrification – here’s how