Nearly half of 208 customers could opt for the electric version of the supermini, which is due this summer and designed to particularly appeal to fleets. 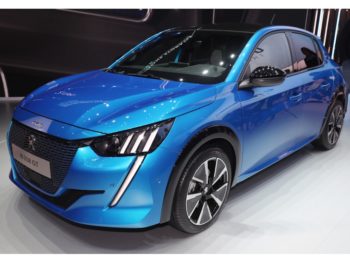 Peugeot’s e-208 GT on the stand at Geneva

Speaking to Fleet World, Peugeot’s LEV product manager Anne-Lise Richard said the e-208 – which was revealed at the recent Geneva Motor Show – is a very important model for the brand and for fleets, as it kickstarts Peugeot’s electrification plans.

“It’s the second pillar for us, because the first pillar was the plug-in hybrids on show at the Paris Motor Show last year,” said Richard. “The e-208 is a new car and the first Peugeot to be fitted with new, full-electric technology. It is also a B-segment car, which is very important in terms of sales.”

And although it’s expected to appeal to private customers, it’s in the fleet sector that it’s particularly expected to find favour.

“We think the car will appeal to both sides, although it will probably be easier for fleet, as many today have an electrification strategy, and so are already thinking about how they electrify their choices,” said Richard. “Many of the fleet companies we’ve been talking with ahead of the launch of this car have clearly thought about it, and are now waiting for the car. So corporate and fleet are going to be more natural.”

But with private customers still expected to play a role in this model’s success, Richard revealed Peugeot is working on a total cost of ownership approach for this car for both fleet and private customers to highlight the benefits it can bring.

“It is more of a B2B approach, but now we are doing that with private customers, making them see the global picture, not only a list price. I think it’s important to go through the global pricing approach to the car, taking into account the energy costs and maintenance costs, because clearly it’s on those levels that an electric car is really interesting.”

As such, private customers will be offered the same leasing deals as B2B customers, said Richard. “We will have the visual leasing monthly payment, and the details for all technologies, maintenance, energy, included in the cost of the car.”

So with the cost benefits stacking for the car, the  biggest challenge she believes, for both private and fleet buyers, is to get people into the e-208.

“They can then see how great it is to drive an electric car – that is very important. Then, take the time, via our sales people or on-line, to help them to find out how many long trips they do every year and so in the end, see which powertrain is right. We will have customers where diesel is still the right option.”

However, with the e-208 offering a claimed 211-mile electric range (WLTP), Peugeot thinks almost half of 208 customers could have the electric version.

“When we take into account customers’ mileage on a daily basis, the number of long trips that they do, we see that 40% of customers could have with an electric car in the B-segment – it’s huge,” continued Richard.

Peugeot will also offer a specific maintenance package for the e-208 to help drivers make the shift to electric.