The Eden Project has renewed its fleet of Renault electric vehicles, having saved more than 17 tonnes of CO2 since their predecessors were deployed in 2016. 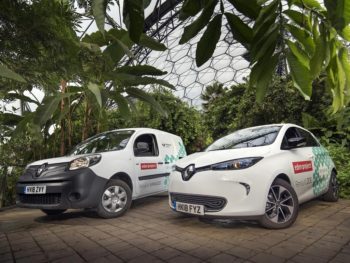 The Eden Project has had Renault EVs on its fleet for two years.

The newcomers comprise three Zoe hatchbacks and 14 Kangoo Z.E. vans, which will be used for maintenance, horticulture, security, live programming and catering teams, as well as for medical support and visitor transport. They will run alongside a pair of Twizy quadricycles already in use at the site, and replace 16 electric Renault vehicles (three Zoes, 13 Kangoo Z.E.s) which have covered a combined 94,000 miles since 2016.

Rita Broe, marketing director of the Eden Project, said: “The electric Renaults are the backbone of the Eden Project, playing a vital role in the operations of nearly every team here. The beautiful fleet of vehicles suits our purposes perfectly, doing everything we need them to do while having minimal impact on the environment and communicating important messages about sustainability to our visitors. We’re very grateful to Renault for their ongoing support of our work.”

Ben Fletcher, electric vehicle product manager at Renault UK, added: “It’s fantastic to see how Renault EVs have had such a positive impact on the Eden Project and its visitors. Not only have they helped the Eden Project perfectly illustrate the real-world benefits of electric vehicles, notably saving nearly 17 tonnes of CO2 emissions in two years, but at the same time have kept their operations running smoothly due to their immense ease-of-use and flexible charging options.”