Tesla will start taking orders for the Model 3 in Europe before the end of this year, ahead of first deliveries due early in 2019, expecting sales of the compact executive electric car to outstrip be significantly higher than in the United States. 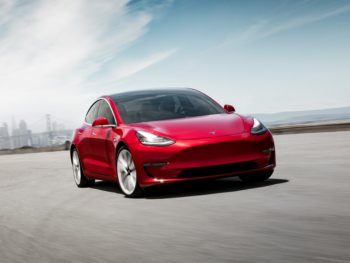 Europe’s compact executive segment is much bigger than in the US, Tesla said.

According to its Q3 2018 shareholder update letter, the company recorded a ‘historic’ $312m (£242m) profit in the three months to the end of September. It manufactured 70,000 vehicles and delivered 56,065 Model 3s in its home market – twice the volume of the Model S and Model X combined.

In Europe, where Tesla said the compact executive segment is twice as large as it is in the United States, the company is expecting an even larger opportunity. CEO, Elon Musk, has hinted that production could also be localised to Europe to cut costs, as is planned for China. This would likely take place in the Netherlands, where US-made products are prepared for European customers.

US customers are coming from premium and non-premium brands, Tesla said, with over half trading in cars which would have been under $35,000 (£27,000) when they were new. The Model 3 outsells similarly sized products from Ford, Chevrolet, Nissan and Hyundai, despite its $49,000 (£38,000) price tag. The $35,000 Model 3 promised when it was unveiled has not launched yet, but is still in the pipeline.

Production volumes for the Model 3 have ramped up, with a focus on cutting assembly costs. Labour hours reduced 30% versus Q2, coming in under the Model S and Model X for the first time, and 5,300 Model 3s were built during the final week of Q3. Across the three-moth period, it averaged 4,300 units per week.