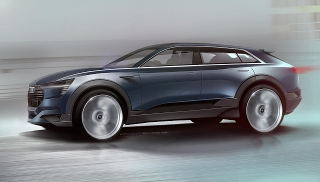 The as-yet-unnamed production car will be previewed as the e-tron quattro concept at the Frankfurt Motor Show next month, and gives Audi a rival for the forthcoming Tesla Model X, positioned between the Q5 and Q7.

Its modular platform is shared with the Q7, and the drivetrain is laid out similarly to the Model X with a battery under the floor within the wheelbase. Three electric motors – one at the front axle, two at the rear – will offer fully electric four-wheel drive.

Audi is claiming segment-leading aerodynamics thanks to its completely closed underbody and optimised shell. The concept offers space for four adults and a coupe-like profile – similar to the BMW X4, Mercedes-Benz GLC Coupe and Porsche Macan.

In May, the company announced at its shareholders’ meeting that it would be investing €24bn (£17bn) in its facilities and staff over the coming years, preparing to launch eight new models including two SUVs in the Q range, beginning with the Q1 next year.