As the fastest-growing car manufacturer in the UK, MG is setting its sights on electrified vehicles to act as the tip of the spear in the UK for rising fleet sales. 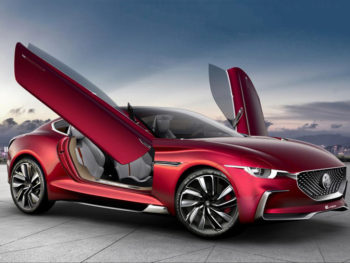 MG Motor UK’s head of sales & marketing, Daniel Gregorious said that MG’s UK sales have increased 47% in the past year, driven by a 44% increase in conventionally powered MG3 sales, as well as 66% for the MG ZS compact SUV. However, the current retail:fleet mix stands at 75:25 respectively, with an expectation that MG’s EVs will shift that to a more balanced 60:40 split.

Following the launch of the new MG ZS EV – a sub-£25k B-segment SUV with 163 miles range and seven-year warranty as standard – MG has now confirmed that by 2021 a new all-wheel drive electric sports car will join its line-up, as well as two new plug-in hybrid models, as first reported by Fleet World last year.

Speculatively, these are likely to take the form of plug-in hybrid versions of the Qashqai-sized MG HS and D-segment MG Hector SUV while the electric model is likely to be based on the 2017 E-Motion concept (pictured). In addition, a conventionally-powered replacement model for the MG GS is expected to launch in Q4 this year.

Unlike other manufacturers that have struggled to match supply to demand due to a shortage of battery availability, MG has capacity to spare, according to MG’s parent company SAIC. The firm says that its already up-and-running Gigafactory is capable of producing in the region of 300,000 electric vehicle batteries each year. As a group, SAIC sold approximately 140,000 NEVs (New Energy Vehicle) in 2018, meaning drivers will not face long lead times for its EVs.

The company’s approach to electrification is to be furthered by the training of its dealer network at its Longbridge-based Cecil Kimber College that provides focused education on EVs, their operation and sale.