Engenie is to deploy 150kW ultra-rapid charging points from Swarco eVolt as it broadens plans to expand its charging network. 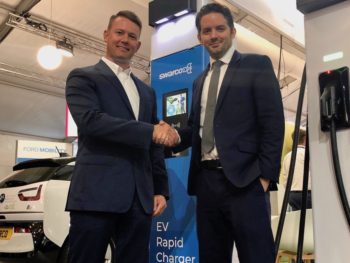 The two firms signed a supply partnership deal last year for 500 of Swarco eVolt’s Raption 50kW units. Since then, Engenie has announced plans to install more than 2,000 rapid charging points across the UK – effectively doubling the UK’s rapid charging network and bringing capability to charge five million EVs a year – after securing £35m of investment.

Ian Johnston, CEO of Engenie, said of the new chargers: “The first 100 are already being installed at Marston’s pubs, M7 retail parks and into Cardiff City centre over the course of this year and the new 150kW charging points will help us build our network of reliable and user-friendly technology to support drivers across the UK.”

Commenting on Engenie’s new deal for its 150kW Raption units, Justin Meyer, general manager of Swarco eVolt, added: “They are an inspiring business to work with, backed by a passionate team determined to make a difference.”

Previous: Extra funding for EV charging points is welcome – but more must be done
Next: Honda e ups the ante on EV range