Honda has announced further details and unveiled the first official images of its Honda e electric vehicle in mass production form ahead of its debut next week at Frankfurt. 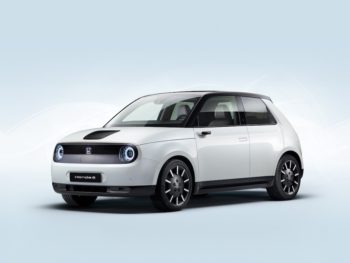 First revealed as the modern-retro Urban EV Concept at the 2017 Frankfurt Motor Show followed up by the e Prototype shown at Geneva Motor Show this spring, the five-door Honda e is due in 2020 and marks the brand’s first mass-production electric vehicle in Europe.

It’s seen huge interest already; within a month of reservations open – and despite full specifications having not been revealed – Honda has already accrued 31,000 expressions of interest across Europe, including 9,000 from the UK, which compares to 30,000 reservations for Volkswagen’s ID.3 electric car.

Honda has already said the Honda e will feature a 35.5kWh battery, enough to provide the rear-wheel drive car with a range of “more than 125 miles (200km)”. Latest info from the carmaker has expanded this to up to 220km (137 miles) while also outlining that the electric motor will be available with a choice of two power outputs, either 136hp or 154hp, and torque of 315Nm – giving a 0-100km/h time of around eight seconds.

As previously announced, the water-cooled 35.5kWh battery can be recharged to 80% capacity in 30 minutes.

However, the range is significantly less than marginally larger-batteried cars including the Hyundai Ioniq Electric that has a 38.3kWh battery that purports to offer 194 miles range, and the BMW i3 with its 42.4kWh battery that provides 182-188 miles on the WLTP test cycle.

Honda has also reconfirmed that the Side Camera Mirror System seen on the prototype will be used, helping to improve aerodynamics and also said enhance safety. This replaces conventional side view mirrors with compact cameras, providing live images to two six-inch screens inside the vehicle.

Drivers can make use of the Honda Personal Assistant to access connected services and applications via the “OK Honda” functionality, which will develop more accurate responses over time thanks to machine learning.

Drivers can also connect to the car remotely through the My Honda+ smartphone application, launched in 2017 and now enhanced to bring functions such as detailed vehicle condition reports, remote climate control, and security and location monitoring. Additional EV-specific functions include battery charge control and range monitor, while charging station and navigation search results can be sent to the car from a mobile device.

Drivers can also use the smartphone app to lock and unlock cars via the digital key.