By Alex Grant / 5 years ago / Road Tests / No Comments

Kia sees a much bigger role for the Optima in its European fleet presence and, while it’s the estate that’s likely to be the volume model, the brand’s first plug-in hybrid has a role to play as well. 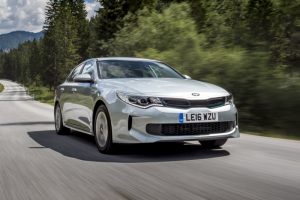 For most markets, it’s not a huge leap. The last-generation Optima was offered as a petrol-hybrid in Asia and North America, but, though it was eventually adapted for European customers, it was only sold in left-hand drive. That’s also true of the new Optima Hybrid, but the plug-in version will be offered in right-hand drive too.

This presents the familiar package of tax advantages which make it an appealing company car option. Available as a single, high-spec trim with CO2 emissions of 37g/km, the Optima PHEV’s 7% Benefit in Kind banding easily offsets its price hike against the top-spec diesel version. Kia reckons up to a third of the saloon’s volume will be the PHEV – not big numbers, but a helpful increase.

It’s an easy spot, marked out by accents of blue and aerodynamic bodywork and wheels which, with active grille shutters closed when extra cooling isn’t needed, dramatically reduce drag compared to the diesel version. Power comes from a combination of 154bhp 2.0-litre petrol engine and a 67bhp electric motor producing a combined 202bhp.

On the green-minded side, the motor can also put energy back into the battery while slowing and, fully charged via the port on the left-hand front wing, the Optima PHEV can travel 33 miles without burning a drop of petrol. Once depleted, the electric parts of the drivetrain continue to lighten the load on the engine, helping to keep fuel consumption as low as possible.

Of course, this does require some management of expectations. The Optima in diesel form is no driver’s car and, while it’s not slow, the PHEV doesn’t deliver the sort of performance you might expect from a saloon with over 200bhp. Undoubtedly not helped by the weight disadvantage of the battery, those expecting huge bang-for-buck could be left a little cold.

Making the most of it also means buying into the frequent charging and not-so-regular long distance trips that suit a plug-in hybrid. It takes between three and four hours to fully charge and, once depleted, the Optima is a heavy petrol hybrid that’s unlikely to be as efficient as the diesel version at motorway speeds. The battery also takes up a chunk of boot space, despite most of the bulk being under the rear bench and in the spare wheel well.

Where it excels is as a medium-distance cruiser, for journeys where most or all of the miles can be covered on the battery. Drivers can select between modes which prioritise EV power, or switching between the two as efficiently as possible, and the dashboard displays mean it’s simple to work out where the engine will cut in. Which it does relatively quietly, except for a metallic drone while accelerating.

They’re all pros and cons true of this car’s closest – and very varied – alternatives. BMW and Mercedes-Benz both offer similarly-sized models, albeit both with a shorter electric range and higher pricing for an equivalent spec. There’s also the Passat GTE, which is faster on paper but also pricier, and the Volvo V60 D5 Twin Engine, which is estate-only. The Optima PHEV is, technologically at least, a viable competitor to all of them.

Which is perhaps the most significant part. This might not be a mass-market car – a plug-in hybrid version of the new Optima estate would certainly broaden its appeal – but it’s a component of a wider footprint in fleet which can only raise Kia’s profile in this segment.

A clever car but, like all plug-in hybrids, the Optima PHEV requires drivers to buy into the proper ownership experience and not select it purely based on CO2 emissions. Those expecting high economy or 200bhp performance could be left wanting.