By Martyn Collins / 4 weeks ago / Road Tests / No Comments

Quirky, but the MX-30 is great to drive, well-equipped and affordable, says Martyn Collins. 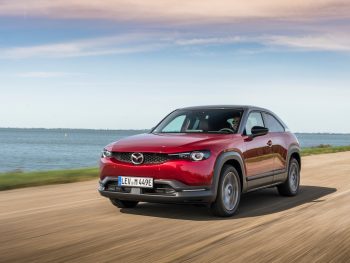 The Honda e and Mini Electric have proved there is a place for quirky electric vehicles that major more on style than range. It’s a formula that Mazda has picked up for its new EV – but unlike the Honda and Mini electric hatchbacks, the MX-30 is more SUV-sized.

The MX-30 certainly doesn’t look like an SUV, with its sportier coupé design. Sculpted to challenge perceptions, the 3D-style family grille makes it look like a modern Mazda from the front, but the rest is new. The most striking parts are the contrasting roof, absent B-pillar and suicide doors to access the rear seats, as with the old RX-8 sports car.

Move to the interior and the tall dashboard with the infotainment system on the top is similar to other Mazda models such as the 3 and CX-30. The infotainment system is easy to operate, everything feels high quality and there are some neat design touches in the form of the cork-trimmed highlights. The cork is a 100th birthday nod to what the Japanese company used to produce before cars. Our European-spec car was closest to range-topping GT Sport Tech trim, but all models are well-equipped with LED headlights, 8.8-inch touchscreen with Apple and Android connectivity, plus 18-inch alloy wheels as standard.

It is very easy to find a comfortable driving position but this is at the expense of rear passengers, as legroom and space are tight. In fact, the rear seats best serve children in occasional use and the novelty of those rear-hinged suicide doors soon wears off too. They don’t open widely, plus the small windows don’t open. Considering its size, the boot is relatively small at 341 litres too.

Mazda’s latest models are known for their keen dynamics and, on the road, the MX-30 impresses. It is the linear, eager acceleration from the Mazda’s 35.5kWh battery and 143hp electric motor that mark it out first – with its unusual but likeable false engine noise. After the initial power surge, the 1.6-tonne weight of this car has its way and the MX-30 just feels capable rather than exciting. Still, the MX-30 is fitted with a smart brake regen feature, with five levels. Choose the strongest, and this Mazda effectively becomes a one-pedal driving car, although a dab of the brakes was still needed to bring the MX-30 completely to a halt.

The tall shape leads to some body roll, but there’s plenty of grip and the steering is precise. The ride is comfortable rather than sporty too.

In fact, the only potential issue with the way the MX-30 drives, is the range – or lack of it. We struggled to match the official 124-mile range, but in the Mazda’s defence it was incredibly cold during the time we had the car.

When the time comes to charge, the MX-30 supports AC and rapid DC charging with both cables included. Having lived with the MX-30, we would recommend domestic charging only if you have a home/workplace charger, given that it takes five hours. Find a 50kW public rapid charger, and this Mazda can be recharged to 80% capacity in just 36 minutes.

Not as sporty as the MX names suggests and the 124-mile range may not suit everyone, but the MX-30 is an interesting, high-quality EV option.