By / 5 years ago / New Cars, Road Tests / 1 Comment
Mitsubishi has enjoyed phenomenal success with the Outlander PHEV since it was launched in 2014. The intuitive controls make it one of the best plug-in hybrids available, while the low NEDC CO2 emissions add up to attractively low tax liability for business users. 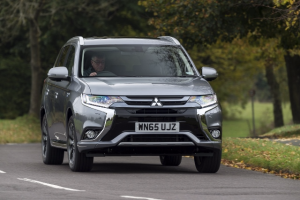 For 2016, Mitsubishi has carried out a range of tweaks to improve the car further. Outlander PHEV is the first to gain exterior styling that follows Mitsubishi’s new design direction, which the company calls ‘Dynamic Shield’, first seen as a concept at the Paris Show in 2014.

This brings LED headlamps and new lighting at the rear. The car is now 40mm longer and there are silver-finish roof rails, a piano black finish to the front fog lamp bezels and 18-inch alloy wheels. Inside there is a range of new and optional equipment from leather upholstery to a heated steering wheel, while the Mitsubishi Communication System features fewer buttons and improved software.

Small but effective differences include an electric tailgate that opens higher and delivers a single beep warning. The suspension settings have been revised with a stiffer front suspension cross-member and revised spring and damper rates. There is better sound insulation inside the cabin, while fuel consumption and emissions have been improved too. There is now a five-year warranty for the car and an eight-year warranty for the battery.

These serve to push the Outlander PHEV upmarket and make it a more pleasant vehicle to drive and own. Having run a long term test Outlander PHEV, which was the best thought-out plug-in hybrid at the time it was launched, the range of revisions are timed to keep it competitive as new rivals come to market.

The first part of our test drive was an urban route, which was around 40 miles long and designed to be completed under electric power only, which I managed to do by maximising the use of regenerative braking. This is made easy in the Outlander PHEV by using the steering wheel paddles to alter the degree of regenerative braking, something which Mitsubishi has sensibly left as it was.  The lower noise levels in the cabin are a good move, making the petrol engine less obtrusive than before when it’s operating.

The Outlander PHEV really comes into its own for anyone whose daily drive can be completed electrically. This would mean that petrol costs were minimised, which in turn should bring lower long distance driving costs, if you factor in time to re-charge and extend the car’s range on electric power.

The Outlander is a large car and the chassis changes help to mask its size by improving agility. It was well specified before and now with further trim options, it is well designed to tempt drivers away from brands perceived to be more desirable.

Overall the Outlander PHEV is better to drive than before and builds effectively on the success of the original, launched less than two years ago.

The Outlander PHEV was a good car in the first place, but these changes make a good car better. It remains an attractive option for those with CO2 based tax regimes.

Previous: EV batteries to reduce demand spikes and fossil fuel use
Next: Learning to Drive: On the road with Tesla Autopilot