According to Nissan, customer feedback directly influenced over 100 improvements made to the new Leaf. So it’s ironic that the most obvious, surface-level generational shift is predicted to make the biggest difference: with less divisive styling, Nissan reckons it can sell twice as many this time around. 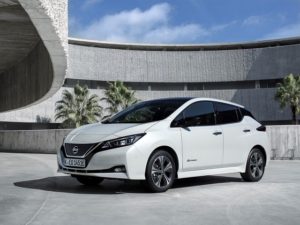 In part, that’s because customers otherwise loved the car. The outgoing Leaf had Nissan’s highest satisfaction and customer retention ratings, it had a 43% segment share in the UK last year, and it’s arguably the household name for electric motoring. Looking a bit less challenging removes a hurdle to getting people behind the wheel – and the improvements aren’t just skin-deep.

It’s well hidden, but this is a heavy update of the outgoing car, largely to incorporate newer technology. The battery capacity has increased from 30kWh to 40kWh (and there’s an even larger pack still to come) within the same overall dimensions, and the motor produces 148bhp instead of 108bhp. In diesel terms, it’s equivalent of an upgrade from a 1.6-litre to a 2.0-litre engine.

The focus is driveability more than outright performance. It doesn’t feel any quicker at low speeds, but the power doesn’t tail off as quickly, which makes for easier overtaking and motorway cruising. A stiffer bodyshell, softer suspension and Qashqai-derived chassis technology all help shed that slightly top-heavy feel of the outgoing car. It’s not sporty, but it rides well, handles neatly and inspires a little more high-speed confidence than its predecessor. 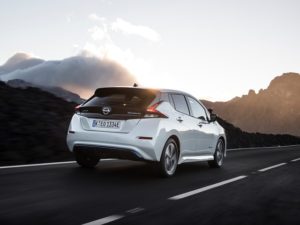 Increased range is important, too. The bigger battery offers a claimed real-world range of 170 miles under mixed conditions, and more than 200 in town. Both seem realistic, and standard-fit rapid charging can restore 80% of that in around 40 minutes. While the range isn’t ground-breaking, every step forward makes choosing EV suitable for even more drivers, and the longer-range model due next year should bring it in line with forthcoming rivals.

Not all of the advances are EV-specific. ProPilot, Nissan’s suite of assistance technologies, debuts on the Leaf offering the usual active lane-keeping and adaptive cruise control functions, as well as hands-off, feet-off parking. The latter is particularly clever, using the surround-view cameras to recognise white lines in perpendicular spaces, but is quite slow to manoeuvre. Motorway assistance is useful too, but we found it struggled with lane markings and was prone to tweaking the throttle and brakes around other cars. 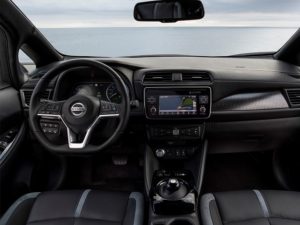 The e-Pedal is simpler, and far more impressive; it’s essentially a mode which allows most driving to be done without touching the brake pedal. Lift off the throttle and the Leaf seamlessly combines strong regenerative braking and the disc brakes to slow the car, all the way to a stop. It’s quite aggressive at the top of the pedal, but doesn’t take long to become second nature.

Otherwise, it feels quite a lot like the old car. Exterior dimensions are almost unchanged, the cabin still seats four adults with a fifth straddling the hump between the rear footwells, and boot capacity is among the largest in the segment. The dashboard is completely new, but there’s still no reach adjustment on the steering wheel, and several useful buttons are hidden next to the driver’s door. Nissan’s feature-rich infotainment system is also carried over, and it’s still fairly unintuitive, though at least now there’s the option to use Android Auto or Apple CarPlay instead.

Attitudes to electric cars have changed beyond recognition since 2011, and the Leaf has had a large role in that shift. By chipping away at its weaker points, the new one feels well placed to capitalise on growing customer demand – the big difference is, there’s no styling hurdle to overcome before they make the switch.

The Leaf has been a bit of a trailblazer, and this new version easily puts it back up amongst the best on the market. But, with a wide choice of alternatives, and some longer-range rivals in the pipeline, not pushing the boat out on range and charging times feels like a bit of a missed opportunity.

Previous: MFG and ChargePoint Services to install 200 rapid forecourt chargers
Next: PSA to electrify across all brands and reenter US market