PSA to electrify across all brands and reenter US market

PSA Group CEO Carlos Tavares has confirmed that every model of PSA vehicle will be offered with electrification as an option, at the Automotive News World Congress in Detroit. 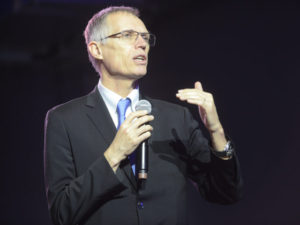 “Every model will have an array of powertrains including at least one electrified one,” said Tavares, adding that PSA will make its comeback in the United States following a 25-year absence, using the recently acquired Vauxhall/Opel brand’s engineers to facilitate the move.

Tavares commented: “We are going to launch 124 new models across six regions.

“We have given the Opel engineering division the responsibility to ensure that our future products for this market will be fully US-compliant.

“One thing I can tell you is that, the cars which will be US-compliant are now being engineered. And we have a specific team of US engineers who are doing that job in Europe right now.”

Tavares’ comments follow PSA’s intention to offer its Free2Move Lease (F2ML) option in America, which allows fleet managers to choose from a wide selection of vehicles, along with packaged services in order to reduce their cars’ total cost of ownership and be better able to schedule maintenance operations, all the while streamlining the cars’ usage by staff.

PSA’s electrification is, however, unsurprising given European governments’ electrification plans in order to combat air pollution. In all, some 40 electrified models will be spread across PSA’s five brands: Peugeot, Citroën, Opel, Vauxhall and DS.

PSA had already announced an electric Corsa for 2020 and a plug-in hybrid Grandland X in 2019.