By Alex Grant / 5 years ago / New Cars, Road Tests / 1 Comment
The stats behind Volvo’s first plug-in hybrid SUV, the XC90 T8 Twin Engine, read like a recipe for success in upper-echelon company car fleets. So it should come as no surprise that it’s already stretching the brand’s UK allocation. 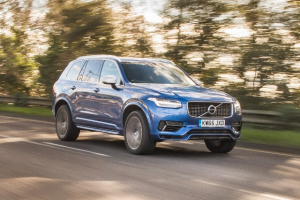 At 25% of the UK XC90 order bank, it’s over twice the anticipated share of the SUV’s mix and Volvo is about to start taking orders for the 2017 model year, launching this summer, as it’s sold out of the 2016 version. This will outsell the V60 Plug-in Hybrid several times over, and end users are heavily weighted towards fleets, particularly director-level company car drivers and business owners.

There are some similarities to the V60. The XC90 uses a conventional engine – petrol, not diesel this time – to power the front wheels, while the rear axle is electric, powered by a mains-rechargeable 9.2kWh lithium-ion battery. That combination produces 407bhp, four-wheel drive and offers a range of 27 miles on a full charge.

However, the development was entirely different. The XC90 was designed to be take alternative drivetrains, so the packaging is much neater than the V60. There’s no loss of boot space, it still has seven seats and the battery is in a well-protected compartment in the transmission tunnel. Apart from the charging port on the wing, it’s hard to tell.

But it’s the cost benefits that are the biggest selling point. It qualifies for a 100% first year capital allowance, there’s a 20% relief on corporation tax and low National Insurance contributions, while drivers get to take advantage of 7% Benefit in Kind liability (compared to 29% for the diesel, on 2016/17 rates). Perhaps less important for fleets, Volvo has the only plug-in hybrid SUV in this class to qualify for the new £2,500 Plug-in Car Grant, meeting the range, CO2 and sub-£60,000 RRP requirements in the entry ‘Momentum’ trim.

Most fuel economy figures can be taken with a pinch of salt and, not unique to the XC90, the claimed 134.5mpg should be viewed as a little arbitrary. Plugged in regularly and used mostly for short commutes, drivers won’t have many problems seeing at least that sort of economy. On long motorway journeys with no recharging, it’ll function as a 2.3-tonne petrol hybrid – though for business owners that may be a cost at least partly offset by the tax efficiency.

Real-world economy is helped by the Volvo’s ability to cruise at up to 78mph just using electricity, though obviously that will blunt the range considerably. The motor can also assist the petrol engine at up to 109mph, lightening the load and cutting fuel consumption even when the battery is depleted, rather than becoming a heavy ballast. That’s just as well, because the XC90 takes at least two and a half hours to fully charge – motorway top-ups are a wasted effort.

It’s also worth reining in your expectations about performance. At 2.3 tonnes, the Volvo’s 407bhp gives it effortless, linear acceleration rather than adrenaline-pumping straight-line pace. But it’s quick off the mark, the combination of supercharged and turbocharged petrol engine with electric torque giving surprising urgency. However, plentiful supercharger whine under load doesn’t disguise the coarseness of the four-cylinder petrol it’s connected to.

There is one major compromise. Volvo had to re-tune the shock absorbers and anti-roll bars in the T8, and it’s made the ordinarily comfortable steel-sprung suspension incongruously fidgety over anything but the smoothest of tarmac. Thankfully this is an easy problem to solve, with the £2,150 air suspension option offering a far more luxurious ride, even on large wheels. It’s a must-have.

The XC90 has reinvented Volvo’s presence in this sector, and the T8 Twin Engine is in a strong position even compared to rivals’ plug-in hybrids. However, as is the case with all similar products, getting the most out of it isn’t simply a case of gentle driving – long-distance drivers could still be better suited to the D5 diesel.