Ford’s forthcoming Plug-in Hybrid Transit Custom has made its first public appearance just weeks ahead of the start of London-based fleet trials. 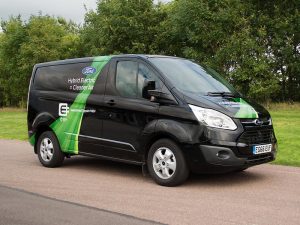 Not due on sale until 2019, the Transit Custom PHEV – debuted this week at the Cenex Low Carbon Vehicle 2017 event in Millbrook – uses Ford’s 1.0-litre EcoBoost engine as a range extender, giving an electric range of 31 miles and a total range of more than 310 miles (500km).

Full technical details, including for the onboard batteries and electric motor – have still not been supplied although Ford says the liquid-cooled lithium-ion batteries will be situated under the load floor, preserving the cargo volume of the standard Transit Custom and bringing an increased payload capacity compared with battery-only electric vehicles.

The Transit PHEV forms part of Ford’s plans to launch 13 electric vehicles over the next five years, with the carmaker also having announced that it’s working with Deutsche Post DHL on electric vans.

Trials of the Transit PHEV – announced earlier this year and supported by Transport for London – are due to start in London in the coming weeks with key city-based businesses, including Metropolitan Police, British Gas and Clancy Plant. The 12-month trial of 20 vans will explore how the PHEV technology can maximise clean air benefits and will use telematics devices to collect real-time data along geofencing technology, which can help ensure emissions regulations are met, for example by switching the hybrid system to electric-only mode when a vehicle enters a low-emission zone within an inner-city area.

“Cleaner vans, like those being used in this trial, will be vital in helping the freight and fleet sector to reduce the emissions and play its part in tackling the Capital’s air quality crisis. We are also using the data from the trial, which will be an invaluable resource for our LoCITY programme that encourages commercial businesses to use greener vehicles,” said Lilli Matson, Transport for London’s director of transport strategy.