By Jonathan Musk / 4 years ago / International News / No Comments 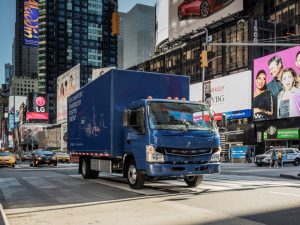 500 units shall be delivered within the next two years, with mass production planned for 2019 onwards.

The vehicle’s lithium ion battery consists six high voltage packs with 420 V and 13.8 kWh each, making a total of 82.8kWh. Supporting both AC and DC charging, the battery pack can be recharged to 80% via CCS rapid charging standard in one hour, while AC charging takes around 9 hours to 100% from flat.

Maintenance for the truck is estimated to cost 30% less than an equivalent diesel powered truck and fuel savings of roughly £885 (1,000 euros) per 6,200 miles (10,000 km) is possible, (power and diesel price dependent). The Fuso eCanter is estimated to pay for itself in 3 years.