Employees at The Glenmorangie Company in Scotland have been given further insights into the benefits of switching to electric at an EV day run by Grosvenor Leasing. 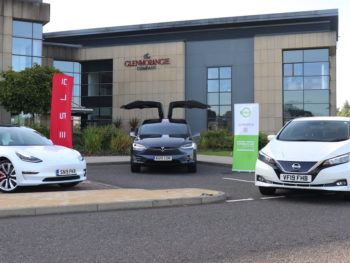 The one-day event provided Glenmorangie employees with the chance to test drive cars from Tesla, Mitsubishi and Nissan plus spend time with experts from Grosvenor’s 0Zone team who answered questions about choosing electric vehicles and provided key information regarding moving to all electric.

The event forms part of Grosvenor’s ongoing work to help Glenmorangie replace their traditional petrol and diesel fleet with electric cars and vans. The work has been led by Mark Gallagher, Grosvenor’s green fleet specialist and the winner of a BVRLA hero award earlier this year.

As a result, Glenmorangie has replaced vehicles with plug-in hybrid models of the 4-wheel drive Mitsubishi Outlander, alongside fully electric Nissan Leafs and the Tesla Model 3, making use of Grosvenor Leasing’s 0Zone solution that helps companies transition to electric and ultra-low emission vehicles.

The 0Zone team also looked at Glenmorangie’s pool fleet, managed by a central administration office, with a view to converting all company and pool vehicles to plug-in models across the board.

Danielle Beall-Kemp, Glenmorangie’s indirect purchasing manager, said: “It’s really important to us as a business to move towards zero emission driving, and by enabling our staff to drive the cars and spend time with Grosvenor’s team of experts went a long way towards reassuring people that an electric vehicle is a great choice for their next company car.”