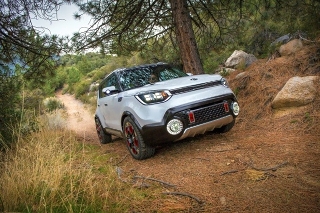 The Trail'ster concept's drivetrain combines a 185bhp turbocharged petrol engine, which powers the front wheels, with a 35bhp electric rear axle, supplied with electricity via a 1.2 kWh battery under the boot floor.

This e-AWD system offers additional traction on slippery surfaces, increases power and torque under heavy acceleration and functions as a motor-generator in its own right, charging the battery and enabling fully electric driving for up to three miles. It's a similar layout to the systems used by Lexus in the NX and RX.

Helped by a Helped by a Hybrid Starter Generator on the petrol engine, which shuts it off when not required and can charge the battery, Kia is claiming 30% better fuel economy in the city, and 10% on the highway (based on the United States’ test cycle), compared to the 2.0-litre petrol Soul.

Tom Kearns, chief designer, Kia Design Center of America, said: ‘The Trail'ster concept is a near-future look at how the production Kia Soul would logically evolve into an AWD-capable version that's built to escape the city streets and roam into the mountain wilderness.

‘It takes the go-anywhere capability of an SUV and reimagines it within a compact and sporty package with an expressive design to match.’