Hyundai Motor will launch a car sharing programme in Amsterdam next month, with a fleet of 100 Ioniq Electric vehicles available for use around the city. 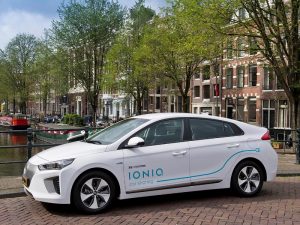 Announced at the Frankfurt Motor Show, the fleet will be available following an inauguration ceremony on 5 October. The cars offer a range of 175 miles to a charge, with 80% replenished in around 23 minutes using a rapid charger.

Hyundai Motor said Amsterdam had been chosen because of its widespread charging infrastructure, comprising over 2,200 points, and for its target to become CO2 neutral by 2025, which was said to resonate with the carmaker’s sustainability strategy.

It’s not the first electric car sharing fleet in the city; in 2011 Daimler introduced a fleet of electric Smart ForTwos in Amsterdam, under its Car2Go brand.

Further details of the scheme in Amsterdam will be announced at the launch event.

Previous: Chery’s plug-in SUV is aimed at fleets
Next: Uber to pilot EVs in Amsterdam under LeasePlan partnership