EV charging network InstaVolt has reached a key milestone of one Gigawatt hour of renewable power delivered to electric vehicle users across the UK, which is sufficient to power six million miles of emission-free driving. 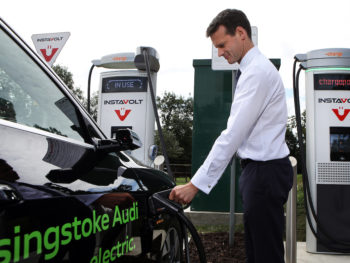 InstaVolt chargers were first commissioned in September 2017, which means this milestone has been reached in a little over two years

Demonstrating drivers’ accelerating shift to EVs, the milestone has been reached in a little over two years, following the first work to commission chargers in September 2017.

Adrian Keen, chief executive officer at InstaVolt, said: “This is a great achievement for InstaVolt, and shows us just how quickly the electric vehicle industry is growing. As well as a growing number of users, we are seeing confidence in our network increase as drivers arrive at our chargers with less remaining power in their batteries, knowing they’ll receive a reliable service with InstaVolt.

“This milestone further demonstrates that confidence in electric vehicles is growing, and we are a key part of that movement as we continue to roll out chargers right across the UK that drivers love for their ease of use and reliability. We are also seeing greater commitment to electric vehicles from the manufacturers with larger vehicles such as the Tesla Model 3, Jaguar iPace, Hyundai Kona and Audi e-tron all now on the market, all with bigger batteries delivering greater real-world range.”