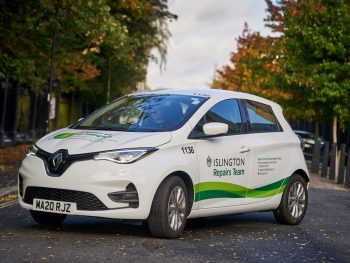 Part of wider plans to switch more vehicles within the council’s 500-strong fleet to electric, in line with its goal of creating a net zero carbon Islington by 2030, the Zoes will be used by project managers within the council’s Voids Team. The team is part of its Housing Property Services division, and the vehicles will be used to inspect and assess vacated council properties across the borough.

The Zoes were chosen for their pricing, real-world range of up to 245 miles and flexible charging options. The vehicles were procured via The Procurement Partnership Limited (TPPL) framework agreement and were selected as the best fit for the contract requirements from a choice of vehicles from 14 manufacturers.

As well as switching vehicles cover to EVs, the council is also upgrading its fleet charging infrastructure to support the move.

“The team visits all kinds of locations across the borough, and the convenient size of the Zoe has proved to be hugely beneficial, ensuring that operatives can park easily. The Voids Team have also been complimentary on the ride, range and navigation system within the vehicle,” she added.