Jaguar‘s electric SUV – I-Pace – has entered final testing in Las Vegas, ahead of its global reveal in early 2018. 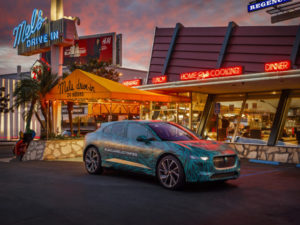 March 2018 is the month to mark on your calendars, when Jaguar will announce I-Pace pricing and specifications and open order books for full configurations.

The British company says it has completed more than 1.5 million miles and 11,000 hours of component rig testing on 200 production prototypes.

A year after the I-Pace concept reveal at the 2016 LA Auto Show, Jaguar has returned to the iconic town for final prototype testing of range and durability tests.

Jaguar says interest has been strong, with “thousands” of potential customers having clicked the “I want one” button on the jaguar.com website.

Although official range is yet to be announced, the company gave an example of a Californian West Coast drive of 200 miles on one charge in the prototype. Similarly, charge times are to be confirmed, but indications are the 200-mile range capable lithium-ion battery will charge to 80% from zero in “a coffee break”.

Ian Hoban, Jaguar vehicle line director, said: “After 1.5 million global test miles, the I-PACE is ready for production and is proven to deliver long distances on a single charge. Jaguar’s first battery electric vehicle will also be fast to charge; our target is a zero to 80 per cent charge being achievable in a coffee break.”