Ecotricity has teamed up with Rolec EV to launch a new green charging offer as it also reveals new pay-as-you-go charging rates for its Electric Highway network. 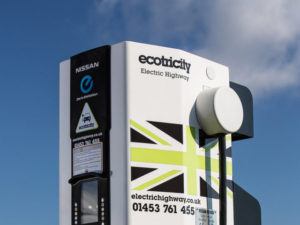 The energy firm first introduced charging in July 2016, initially with a fixed fee that drew criticism for the costs involved, followed less than a week later by revised rates.

Then in July this year it launched a new pricing model that separated the cost of energy from the cost of providing the service, levying a £3 connection fee – waived for Ecotricity home energy customers – and an energy charge of 17p per kWh, as well as a longer maximum charge time of 45 minutes.

Now Ecotricity has announced that it’s scrapping the £3 connection fee for all customers and switching to an energy charge of 30p per kWh – which is halved for its home energy customers.

Intended to make charging easier and more cost-effective, the ‘Fully Charged Bundle’ from Ecotricity and charge point provider Rolec EV, includes green electricity and an EV tariff said to be the lowest cost EV offer on the market, which claims to save the average EV household around £120 a year compared to a Big Six standard tariff.

The package also includes a Rolec WallPod home charging unit for £99 including installation, which can charge a vehicle up to 60% faster than a standard three-pin plug socket. The offer represents a saving of around £180 and is exclusive to Ecotricity customers.

Dale Vince, founder of Ecotricity, said: “Our ambition in doing this is clear – to make electric vehicle charging at home and on the road more simple, joined up and cost effective for existing and new EV drivers, and in this way we hope to encourage more people to go electric.”