Jaguar has confirmed its first electric car will be able to charge from 0-80% in 45 minutes, offering an approximate range of 250 miles. 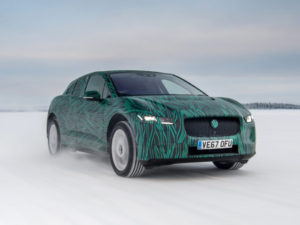 Jaguar’s I-Pace will be able to charge at 100kW, providing drivers with around 250-miles range, based on the electric car’s preliminary NEDC figure of 310-miles range at 100% charge.

The company had previously announced I-Pace would take 90 minutes to charge its 90kWh battery to 80% using a 50kW charge point, which is the maximum rate provided by most of today’s CCS-equipped rapid chargers. Jaguar previously hinted to Fleet World that other battery sizes might be offered for I-Pace, although not at launch.

However, it is not yet clear whether I-Pace will support higher rates of charge. CCS2.0 can support speeds of up to 350kW and in Europe a consortium of manufacturers, including BMW and Volkswagen Group, are creating the Ionity network of rapid chargers to support their next generation of electric vehicles, including Porsche’s Mission E and Volkswagen’s I.D electric range. Similarly, other networks being rolled out support 350kW, including Allego and more are being rolled out at fuel forecourts.

Charge point specialist Chargemaster has suggested the next wave of UK rapids could support up to 150kW charge points, concurrent with Tesla’s Supercharger network and keeping pace with battery progress and capacity.

The public premiere of the hotly anticipated electric Jaguar I-Pace will be held at the Geneva Motor Show on 6 March, with pricing revealed and order books to open from 1 March.