Solar-charging technology that could increase fuel efficiency and range and cut CO2 is to make its way into new Kia and Hyundai cars. 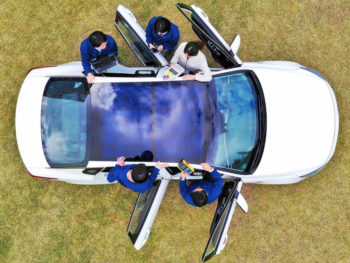 The move will not only see electricity-generating solar panels incorporated into the roof of hybrid and battery electric vehicles but also internal combustion models – said to be a world first.

Due from 2019, the first generation of the system will be used for hybrids and will comprise a silicon solar panel structure integrated into a standard car roof. This system is capable of charging 30 to 60% of the battery over the course of a normal day, depending on weather conditions and other environmental factors.

The second-generation semi-transparent solar roof will be applied to ICE vehicles, and can also be combined with a panoramic sunroof.

The third-generation system is currently in testing and will be used for the roof and the bonnet for battery electric vehicles. Details have been provided of when the second and third-generation technologies will launch and which models will gain the technology.

All three systems will use a solar panel, a controller and a battery. Hyundai Motor Group said using a 100W solar panel can produce up to 100Wh of energy. The controller increases the efficiency of electricity from the solar panel, converts it and stores it in the battery or uses it to decrease load on the vehicle’s alternating current (AC) generator.

“In the future, we expect to see many different types of electricity-generating technologies integrated into our vehicles. The solar roof is the first of these technologies, and will mean that automobiles no longer passively consume energy, but will begin to produce it actively,” said technology developer Jeong-Gil Park, executive vice president of the Engineering and Design Division of Hyundai Motor Group.