Kia is adding the first plug-in hybrid variants to its Ceed range as it looks to expand powertrain options across its wider vehicle line-up. 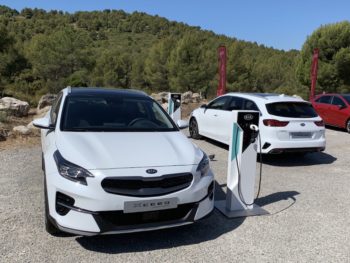 Due on sale in Europe in early 2020, the Kia XCeed crossover and Ceed Sportswagon mark the first plug-in models built by the brand in Europe and will feature a plug-in hybrid powertrain combining a 1.6-litre four-cylinder petrol along with a 44.5kw electric motor and an 8.9kWh battery pack – all covered by Kia’s usual seven-year, 100,000-mile warranty as standard and extended to cover the battery pack and motor.

Paired with a six-speed dual-clutch auto transmission rather than an e-CVT, the powertrain offers a total system output of 141hp and 265Nm, enabling the Ceed Sportswagon to accelerate from 0-62mph in 10.8 seconds, and the Kia XCeed in 11.0 seconds.

Kia is targeting all-electric range of around 60km (37 miles), helped by standard regenerative braking technology. CO2 emissions are still being homologated and will be released prior to order books opening.

Marked out from petrol and diesel models by revised exterior and interior features, including a new grille and wheels, the models also get new onboard features such as a charging indicator and a bespoke version of Kia’s 8.0-inch touchscreen infotainment, or an optional 10.25-inch touchscreen infotainment and navigation system, with Kia’s UVO Connect telematics to locate available charging points nearby.

Both vehicles are equipped with Kia’s new Virtual Engine Sound System, an audible warning system which activates in electric-only mode at low speeds or when reversing. The system generates virtual sound levels of up to 59 dBA to safely notify pedestrians of the car’s presence.

Both models also locate the battery pack alongside the 37-litre fuel tank beneath the rear bench to help reduce the impact on boot capacity. As a result, the Ceed Sportswagon provides 437 litres of luggage space compared to 625 normally, rising to 1,506 litres with the rear seats folded compared to 1,694 for the petrol/diesel models. Luggage capacity in the Kia XCeed Plug-in Hybrid drops to 291 litres from 426, growing to 1,243 litres with the rear folded down compared to 1,378 litres for the standard models. And there is a dedicated space beneath the boot floor of each car to store the charging cable when not in use. Both models will also be available with an optional Towing Pack for towing braked loads.

The Kia XCeed and Ceed Sportswagon Plug-in Hybrid will be built in Žilina, Slovakia. UK specification, pricing and on-sale date will be announced in due course.

Previous: Previous Post
Next: Interview: Mitsubishi MD Rob Lindley on the PHEV that broke the mould