By Jonathan Musk / 4 years ago / International News / No Comments

The first 20 (out of a total 35) Toyota Mirai were handed over to the CleverShuttle ride-sharing shuttle service, making it the world’s largest fleet of fuel-cell vehicles run by a single operator. 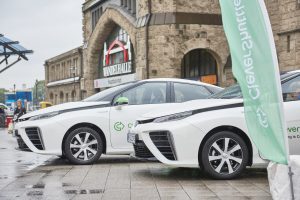 Following launches in Berlin, Leipzig and Munich, the CleverShuttle ride-sharing service will launch in Hamburg next, relying solely on the Toyota Mirai hydrogen fuel cell vehicle, the company said. The Mirai’s only exhaust is water vapour.

CleverShuttle’s customers mostly consist of train passengers looking for transport to and from train stations. Using an app to book the service, customers can save up to 40% when compared to standard taxi services, the company said, thanks to the grouping of passengers with similar routes.

The remaining 15 Mirai will be delivered to CleverShuttle’s Munich branch, ahead of the Oktoberfest, helping festival goers travel emission-free from the station to the folk festival.

Tom Fux, managing director and president of Toyota Deutschland GmbH, said: “We are proud that CleverShuttle chose us to be its trusted partner, relying solely on Toyota’s fuel-cell technology in Hamburg from now on.

“CleverShuttle has proven that using vehicles on an everyday basis, protecting the climate and keeping the air clean are not mutually exclusive.”

Enak Ferlemann, Parliamentary State Secretary to the Federal Minister for Transport, added: “We want to bring even more e-mobility to the street. Hydrogen and fuel cells provide a vital alternative and complement purely battery-powered vehicles. In recent months, the number of public hydrogen fuel stations has nearly doubled.”