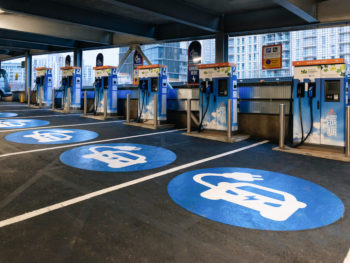 The landmark EV hub is the first of five which will be opened in London over the next few years to serve the capital’s 30,000 EV drivers

Located at Stratford International Station car park, the landmark EV hub – which goes live on 28 December 2019 – is the first of five which will be opened in London over the next few years to serve the capital’s 30,000 EV drivers.

The hub – which is part funded by Transport for London (TfL)and delivered and operated by Engenie – will host six 50kW rapid chargers featuring connectors compatible with every EV on the market. Chargers are accessible to all EV drivers using a contactless bank card – with no registration or membership required and no parking fees.

The hub is a crucial part of the Sadiq Khan’s EV infrastructure delivery plan, in which he pledged to open at least five rapid charging hubs over the coming years and install 300 rapid chargers by the end of 2020.

He commented: “I want to help people switch to public transport, walking and cycling and want all new cars and vans in London to be zero emission by 2030, not 2040 as the Government is proposing. Today’s announcement will help us to continue to work together with London boroughs and the private sector to deliver a major expansion in charging infrastructure and an electric vehicle revolution in the capital.”

Christina Calderato, TfL’s head of transport strategy and planning, added: “We know that a comprehensive network of charging points is essential if we are to persuade drivers to ditch polluting diesel vehicles and swap them for electric alternatives. Installing 1,000 more residential charging points across the capital means more Londoners can plug their vehicle in while at home, even if they don’t have a driveway. For those that need to charge up in 20-30 minutes, London is one of the leading world cities for rapid charge points. The addition of the east hub in Stratford is the first super charging facility, allowing drivers easy access and convenient methods of payment.”

Earlier this month, TfL hit its target of rolling out 225 rapid charging points in 2019, with London’s rapid charging network now totalling over 300 points.