I’ve made no secret of my belief that rapid charging has transformed the flexibility of electric vehicles. Granted, regular long-distance trips are only for the patient, but half-hour top-ups to 80% means occasional range-stretching needn’t be a barrier to ownership. 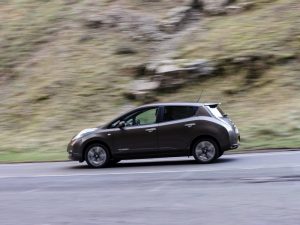 Quick to charge and with a long range, the LEAF has no problems with extended journeys.

The LEAF is faster than most. I’ve taken to watching the displays on the Electric Highway chargers while I wait and, instead of the charge speed dropping off at 80% capacity, it’s still receiving the full 41kW until it reaches 90%. That takes around 35 minutes. In other words, a few extra minutes at the ‘pump’ are worth waiting for.

So, I was surprised to see Electric Highway operator Ecotricity radically alter the usability of this pioneering network. Fees have always been inevitable, but the sudden jump to £6 per half hour is a steep one, particularly as there’s no ‘pay monthly’ option for frequent users.

The LEAF’s range and charge speed mean the time limit is not a big issue – I can still do my 156-mile Cardiff to St Albans commute with a single stop, and it’s rapid charging for the entire time. However, it more than doubles the £4 that the trip used to cost me. Most EVs can’t go as far as the Nissan, so I’d be looking at two stops and a ‘fuel’ cost greater than petrol or diesel. That might make you resent being stuck at a service station.

Of course, it’s not unavoidable. Ecotricity home energy customers get 52 free charges per year, so frequent users could weigh up that benefit against cancellation fees with other utility companies. But I worry that a pricing structure which will inevitably cause users to hold on for their full half hour, and which is easy to avoid, would have been fairer as a monthly membership or per-unit pay-as-you-go fee.