In the five years since Nissan launched the LEAF, the electric vehicle landscape has changed markedly. And few areas show this better than public charging. 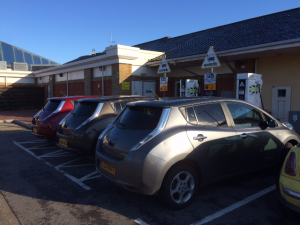 Once a sector defined by small local schemes, roaming was difficult and the cars couldn’t travel far. These days, the range has improved, the points are fast and the network is widespread – particularly Ecotricity’s Electric Highway, which spans most of the motorway network.

Behind that, battery chemistry has improved. So the 30kWh battery in the LEAF not only increases the range, but it also charges quicker. That is to say, it still reaches 80% in half an hour from ‘empty’ – not that you never arrive at a service station like that – but that’s almost as much range as a full charge of the old battery.

Granted, a typical range of 120 miles is still short, but my run from home in Cardiff to the office in St Albans is now possible with a single stop half way, instead of two. Aside from rolling the dice with a valet parking company’s driving style, route planning is all it takes to go further.

Well, almost. Cheap long-distance travel is no longer a secret. There are bottlenecks in the network – Reading Services is one – where lines of EVs (and often Outlander PHEVs) are waiting for the charging points. With the Electric Highway considering tariffs this year, it’ll be interesting to see whether the hybrid tailbacks alleviate.

Previous: NEVS to drop Saab brand from its future EVs
Next: BMW i to reuse i3 batteries for home energy storage