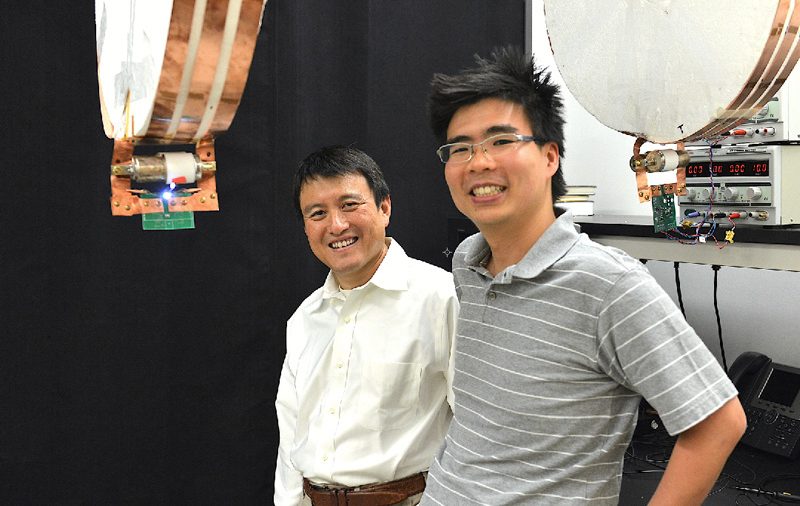 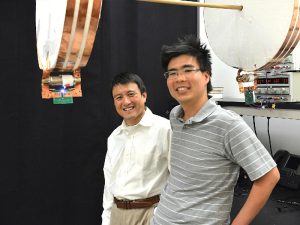 (L-R) Prof Shanhui Fan and graduate student Sid Assawaworrarit have developed a device that can wirelessly charge a moving object at close range.

Published in Nature journal, the research saw electricity wirelessly transmitted, initially to a moving LED light bulb (see video here). This covered a 1-milliwatt charge although electric cars usually need tens of kilowatts in order to operate. As a result, the team is now working on significantly increasing the amount of electricity that can be transferred and tweaking the system to extend the transfer distance and improve efficiency, the Stanford News Service reports.

Researchers added that the technology could help virtually eliminate concerns about electric vehicle range and lower their cost.

“In theory, one could drive for an unlimited amount of time without having to stop to recharge,” Shanhui Fan, a professor of electrical engineering and senior author of the study. “The hope is that you’ll be able to charge your electric car while you’re driving down the highway. A coil in the bottom of the vehicle could receive electricity from a series of coils connected to an electric current embedded in the road.

“We still need to significantly increase the amount of electricity being transferred to charge electric cars, but we may not need to push the distance too much more,” said Fan, adding: “We can rethink how to deliver electricity not only to our cars, but to smaller devices on or in our bodies. For anything that could benefit from dynamic, wireless charging, this is potentially very important.”